Are you completely new to dental insurance? Are you clueless about the difference between prosthodontics and periodontics? If that’s the case, I’d recommend you visit the previous three parts on dental benefits basics, which you can find here:

But if you already know the basics and would like to learn even more, then read on!

Just a warning: this post gets into topics that some people would consider “advanced,” but I like to think I’ve made everything simple and straightforward.

Let’s start by defining “waiting period,” a common term you’ll run across in most dental plans, and one that often leads to confusion and skepticism. Many dental plans include waiting periods of some kind, but they can vary in terms of length and services they affect. Basically, a waiting period is a given length of time that a member needs to be enrolled before they can take advantage of a certain part of their dental plan.

Let’s say your effective date is January 1st. You could go to the dentist for diagnostic and preventative care and take advantage of the plan’s coverage on New Year’s Day (good luck finding a dentist that’s open, though!). However, if you need care for basic services, you won’t be able to take advantage of the plan until April 1st, three months after the effective date. For any major services, this would increase to six months, or July 1st.

Something to keep in mind is that many plans will waive waiting periods if you’ve been covered by another plan for at least a year. So if you’re looking to switch plans, breathe a sigh of relief because there’s a good chance that waiting periods don’t apply to you at all!

The first is orthodontics. Orthodontics usually have an age limit of 19 — this means if you’re over 19 and need orthodontic services, you can still receive treatment, but the costs won’t be covered by your insurance plan.

The only other services that commonly have an age limit are fluoride treatment and sealants, which are typically covered until age 14.

OK, that was simple enough, right? Now let’s jump into something a bit more complex. As promised, I’ll keep it straightforward and easy to understand.

Say you visit a dentist who is considered out-of-network on your insurance plan. Does that mean the cost of your visit won’t be covered at all? Thankfully, no. There’s more to the story than that.

First off, it helps to understand the difference between a PPO dentist and a non-participating dentist and why it matters:

If the dentist is in-network, things are pretty simple. Your insurance plan will cover the listed percentage of the cost. If the plan says X-rays are covered at 100%, you pay nothing as long as your deductible has been met and your maximum has not (deductibles are often waived for preventative and diagnostic services, so the deductible wouldn’t apply if your X-rays fall under this category). If the plan says fillings are covered at 80%, you pay 20% (again, provided the deductible has been met and the maximum has not). For out-of-network dentists, things get a little more complicated.

To make sense of how this works, you need to know whether you have a MAC or a UCR plan and understand the difference. MAC stands for Maximum Allowable Charge (and can sometimes be called a PPO Fee plan) and UCR stands for Usual, Customary, and Reasonable. Basically, these terms refer to the way that coverage is determined when you visit an out-of-network dentist.

Under a UCR plan, the limit on reimbursement is set based on the Usual, Customary, and Reasonable value for your geographic area. A UCR value is calculated for each dental procedure by tracking all the claims that have been submitted for a specific procedure within a particular geographic area. The UCR value is then set at a level where a certain percentage (usually 80 or 90%) of fees charged for that procedure in that area are less than the UCR value. I told you this would get complex, didn’t I?

How about I try to simplify with an illustrative example: two fictional people, Mack and Ursula, have dental insurance plans with Acme Insurance. Say Mack and Ursula both need a filling and they decide to see the same dentist, Dr. Tooth, for the procedure. Dr. Tooth, being one of the best dentists in the area, charges $200 for a filling. Unfortunately, Dr. Tooth is not a part of the Acme network, so both Mack and Ursula are subject to out-of-network coverage. Let’s see what they’ll each owe.

First up is Mack’s appointment. Mack is enrolled in an Acme Insurance MAC plan, and under Mack’s MAC plan, fillings are covered at 80%. The PPO Fee for fillings on his plan is set at $150, so Acme Insurance will reimburse Mack $120 (80% * $150), and he will be responsible for paying Dr. Tooth the remaining $80. 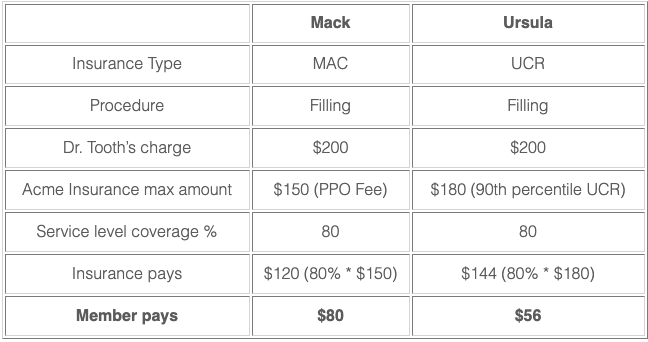 Whew! That was a lot to take in! This should (hopefully) clear up some of the most confusing points. But if you’re still feeling a little lost, or just curious to learn more, you can check out the other posts at the beginning of this one! You can also read even more about MAC vs. UCR here!

Brought to you by Beam Insurance Services LLC. Material discussed is meant for general illustration and/or informational purposes only; is not intended to be relied on as complete information; and it is not to be construed as tax, legal, investment or medical advice.
This material is not meant to be a sale of or an offer to purchase an insurance plan from beam®. Should you have interest in purchasing an insurance plan from or through Beam Perks®, you should seek the help of a licensed professional.
Insurance products underwritten by National Guardian Life Insurance Company† (NGL), marketed by Beam Insurance services LLC, and administered by Beam Insurance Administrators LLC (Beam Dental Insurance Administrators LLC, in Texas). Beam Perks® provided by Beam Perks LLC. Beam Perks® can be obtained separately without the purchase of an insurance product by visiting perks.beam.dental. Policy form series  numbers NDNGRP 04/06 or NDNGRP 2010.
†National Guardian Life Insurance Company is not affiliated with The Guardian Life Insurance Company of America, a.k.a. The Guardian, or Guardian Life.
BM-BLG-0010-201707

* Beam Perks™ is provided by Beam Perks™ LLC. Eligible members age 4 and up at the time of enrollment are eligible to receive Beam Perks™ and must select their Beam Brush color within 45 days of enrollment to participate. If you do not have a mobile device you can obtain Beam Perks™ by contacting Customer Operations at 1.800.648.1179. Beam Perks™ can be obtained separately without the purchase of an insurance product by visiting perks.beam.dental. Beam Perks™ may be changed at any time without notice and is subject to availability. See perks.beam.dental for Terms and Conditions.

# Beam Perks™ is a voluntary program. The information provided under this program is for general informational purposes only and is not intended to be nor should be construed as medical advice. You should consult with an appropriate health care professional to determine what may be right for you. Rewards may be taxable. You should consult with an appropriate tax professional to determine if you have any tax obligations from receiving rewards under this program. If any fraudulent activity is detected (e.g., misrepresented brushing activity), you may be suspended and/or terminated from the program.  If you are unable to meet a standard related to health factor to receive a reward under this program, you might qualify for an opportunity to receive the reward by different means. Contact us at 1 (800) 648-1179 and we will work with you (and, if necessary, your doctor) to find another way for you to earn the same reward. Availability and rewards may be limited due to incentive limits under applicable law. See https://resources.beam.dental/content/perks-terms-and-conditions for full program Terms and Conditions.

† Lower rate based on group's participation in Beam Perks™ wellness program and a group aggregate Beam score of "A". Based on Beam® internal brushing and utilization data. Not all Products Available in All States.

‡ There is no discount associated with the bundling of products.

## Pricing customization may vary based on state specific limitations. Refer to plan documentation for full details of your plan.